The description of Frostborn: Action RPG

Subdue the powers of the gods and confront the army of the dead together with your friends. Make the lands of vikings great again by building a new capital town from scratch and set off for treasures and new victories to the unexplored shores. All of this and more awaits you in the new online surviv... see more

Subdue the powers of the gods and confront the army of the dead together with your friends. Make the lands of vikings great again by building a new capital town from scratch and set off for treasures and new victories to the unexplored shores. All of this and more awaits you in the new online survival RPG Frostborn!

The world plunged into darkness
In the wilds of Midgard, the dead roam in broad daylight.The water from the rivers burns your throat, Valkyries no longer take the fallen in battle to Valhalla and something sinister is hiding among the shadows of forests and gorges. The goddess Hel is responsible for all this. She cursed these lands with her black magic in just 15 days, and now she wants to enslave the kingdom of the living!

Death no longer exists
You are the immortal, valiant Jarl of the northern warriors who no longer face death. Healers and shamans shrug their shoulders and don’t understand why this is happening. But since the way to Valhalla is closed, there is only one thing left to do - arm yourself and send the creatures of darkness back to Helheim!

No man is an island
Frostborn is a co-op survival game with MMORPG elements: team up with other Vikings to build a strong base, confront the creatures that hide among the shadows and in the shrines of the gods and fight other players during raids and random encounters in numerous locations and dungeons.

Berserk, mage or assassin - the choice is yours
Choose from over a dozen RPG-style classes that suit you best. Do you like heavy armor and face-to-face battles? Choose between Protector, Berserk or Thrasher! Prefer to keep your distance and shoot arrows at enemies from afar? Pathfinder, Sharpshooter or Hunter at your service! Or are you one of those who hide among the shadows and stab in the back? Try a Bandit,
Robber or Assassin! And there is more!

Win at all costs
Trade with other players or ambush and assassinate them in the wilds of Midgard. Make peace with another family and protect each other during the raid, or betray their trust and reveal their secrets to others in exchange for resources. The old order no longer exists, now these are wild lands where the strongest survive.

Plow your way to Valhalla
Use the crafting system inherent in real MMORPGs to get everything you need to defeat the darkness created by the black magic of the goddess Hel. Strong walls and delicious food, magic potions and deadly traps, powerful weapons and legendary armor. And if that's not enough - build your own drakkar to raid the overseas kingdoms!

Build your own city
Strong walls, spacious houses and artisan shops - and this is not all that needs to be rebuilt and improved to open the gates of your city to visitors. But be ready for a long journey - a good city cannot be built in 15 days. Coop with other Vikings and the inhabitants of your city to fight for a place in the sun in a world ruled by black magic.

There's no daylight underground
Go down to the ancient sanctuaries of the gods - dungeons in the best traditions of MMORPGs, fight the strongest dead and monsters who are afraid of daylight, get legendary artifacts and find out why the gods left this world.

Experience the survival RPG Frostborn - a new game from the Kefir studio, the creators of Last Day on Earth and Grim Soul. Join now and in 15 days you will understand what it is like to live like a Viking! 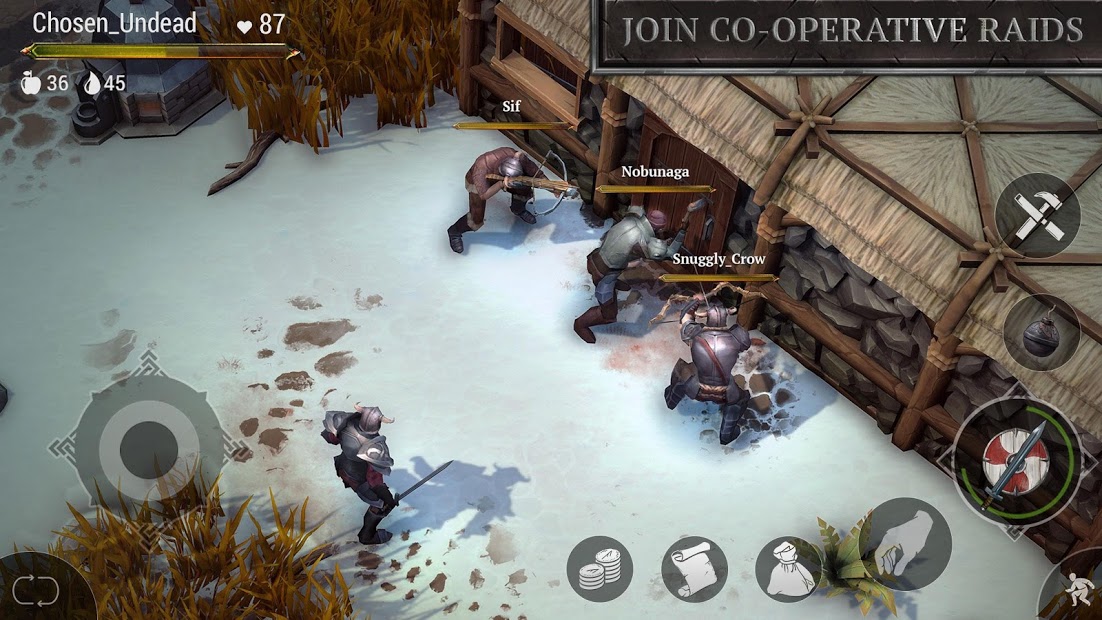